Time and Time and Time Again is just that.  A topsy turvey, timey wimey, story.  Will Black Canary be able to return to the right time?  Join us as we talk about the conclusion of this 3 part story.  Penned by Chuck Dixon and penciled by Butch Guice, we are taking on a journey that is dealing with murderers, love, and time travel.  Birds of Prey 30 in full-effect.

Check out this episode!
Posted by Huntress at 5:32 PM No comments: Celebrate with us, for the 50th episode of Feathers and Foes are upon us.  The Benson sisters have reached the conclusion of the 3 part saga of Black Bird, the villain who can steal powers from other metahumans.  Will she take Black Canary's powers?  The Sonic Cry!  You don't want to miss this one.
What did you guys think about this issue?  Share your ideas with us at our new website: www.wrightonnetwork.com   Like our Facebook Page.  Follow us on Twitter @feathersandfoes.com 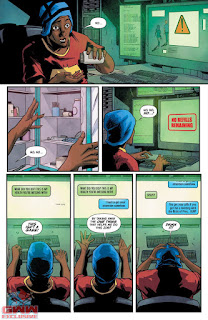 This is not a focal point of the story, but it's rather important.  If Gus is suffering from some type illness that is affecting his mental health, he has a right to keep it private; however, if his condition has the ability of positioning the Birds in danger out in the field, this is indeed a cause for concern.  This is a sensitive issue, and I am quite intrigued on how the Benson sisters tackle this issue.  Folks, we might be in a situation where we have only covered a thinly veiled surface.  Potentially, Gus might be an interesting character with layers and potential stories for the future.  Gus might be the beginning of cementing the Benson sisters' legacy, voice, and signature. 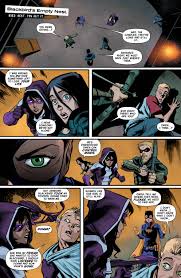 True to form, Huntress is always executed well  Her patience is limited when it comes to questioning Owen, which is quite endearing, for she cares for her friend, Black Canary.  Green Arrow, who makes an appearance in this one is not over bearing, and he's not projecting any of the unattractive qualities that otherwise turn people off.  In fact, he mentions that if Black Canary is under mind control, there is no way they can stop her.  He is not trying to save a defenseless Canary.  He just wants to know if she is OK.

Those of you who have listened to Feathers and Foes from our inception, you have noticed that Mark and Ashford take a lot of cheap shots at Nightwing, insinuating that he is some sort of sociopath.  We kid, Nightwing.  However, I thought it was a jerk move when he grabs Batgirl's grappling gun and takes her for a boost.  Hey Dick Greyson, Batgirl has top billing!  Don't you forget that.  In fact, Batgirl has the Batgirl book and Bat BOP.  Nightwing, you have a self-titled and another book where you are engulfed in an ensemble.  I'm just joking.  I love the art in the Titans book.  A LOT!
Check out this episode!
Posted by Huntress at 6:50 PM No comments: 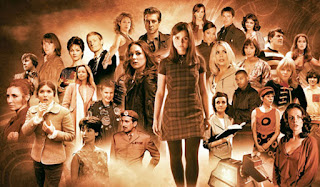 Hello everyone!  The Irredeemable Shag of the Fire and Water Podcast, Siskoid of the Hearts and Romance Comics Podcast, Tim Wallace of the Beetlemania! podcast, Cory, and Ashford of the Wright On Network are the custodians of this tournament.  64 Companions of the classic and new Who in a Battle Royal for grand supremacy!  Actually, this is just an excuse for five fanboys to pontificate about Doctor Who.
Emotions ran high!  High is a relative term in this case, but the Emotions were running, leading to the elevation of anger, despair, malice, apprehension, and redemption.
Who will win?  Join us to find out.  Let us know what you think about this tournament.  Whose opinions did you agree with most?  Who got it dead wrong?  Would you like to see us do this again?

Contact me at www.wrightonnetwork.com
Get a hold of Shag at fireandwaterpodcast.com
Hear Tim's Blue Beetle podcast at shoutengine.com/Beetlemania

Check out this episode!
Posted by Huntress at 5:52 PM No comments: